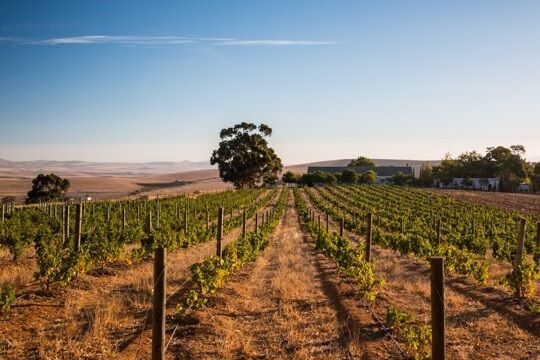 Let’s be honest, things are looking dire for the Western Cape at the moment. With Level 6b water restrictions in place from the 1st of February and Day Zero looming on the horizon, there is plenty of cause for pessimism. In the wake of the 2018 Olive Festival being cancelled due to the constraints it would place on the Riebeek Valley’s natural resources, the question on every wine drinker’s lips seems to be what will become of the 2018 grape harvest.

Fortunately, we have some good news. According to an article published by the region’s local newspaper, dié courant, on Wednesday 31 January, the region’s foremost producers are cautiously optimistic about the grapes they’ve taken in so far and the effects of the drought, although substantial, has not curtailed the area’s yield completely.

Riebeek Cellars in the Riebeek Valley began the harvest by taking in white muscadel and sparkling wine three weeks ago. According to production manager Alecia Boshoff the season is running later than last year but is actually on par when compared to a 10-year average. “We’re expecting a lighter harvest as a result of the drought. Although most of the vineyards still look good, sunburn and other stress symptoms are becoming apparent. In December, we were still very optimistic, but the vineyards really need some rain at the moment.”

According to David Sadie, owner and winemaker of David & Nadia, a member of the Swartland Independent Producers in the Paardeberg-area, this harvest is stressful for both the vineyards and the winemarkers. “We started the harvest two weeks ago and already took in all our Pinotage. The harvest is approximately a week later than the norm, but the slower ripening process can be explained at the hand of less dense foliage and fewer leaves as a result of the drought. The bunches are fewer with lighter berries, and the harvest will definitely be smaller, but that doesn’t mean the quality of the wine will suffer for it. According to Drinks Business, an industry publication, this year will be the smallest harvest in South Africa since 2005, but that vintage is also known as one of the most extraordinary in recent history. We are satisfied with what we get and believe that quantity and quality will balance out in the end.”

Riaan van der Spuy, head winemaker for Leeuwenkuil Family Vineyards Swartland, says he is cautiously optimistic. Although they only took their first grapes two weeks ago, he already suspects that the overall harvest will be between 20-30% smaller in comparison with last year. “The drought is choking the vineyards. We’ve learned that in certain regions the producers are facing a yield of up to 50% smaller. So far, we can tell that the bunches and berries are smaller and lighter, but the white wine grapes we’ve already taken have lovely flavours and the harvest is very healthy. The quality of the grapes depends on where it was planted, and if there was some groundwater available to the vineyards. We believe our old stalwarts, Chenin Blanc and Pinotage, will do well. In the meantime, we are hoping for some cooler weather for the rest of the harvest season.”

It’s only the start of the harvest, and total outcomes are yet to be determined, but it helps to have producers with a positive outlook at the helm. This year may be tough, but the Swartland’s winemakers are tougher.